Moving the comments to this new page, seems to be a challenge, so I’m going to sum up the events and discussion, so far, and hope for more input.  The purpose of this thread, is to elicit comments, observations and questions in order to refine a posit, that the “observed” sea level rise, using satellites, is nothing more than noting underwater volcanic activity.  Comments not pertinent to this discussion will be deleted.  Flames, and or derisive comments  will either be deleted or held for ridicule, either way, it will end poorly.  That said, critical comments are welcome, provided they hold some meaning.

Latitude, using Steve’s site as a message board, brings so information to me.  He shows me this.

Latitude also shows me this……….

Now, I probably shouldn’t have to, but for the ones slow on the uptake, (you probably don’t know who you are), the maps delineates the Underwater ring of fire, where thousands smaller underwater volcanoes are, and are being very active.  A J.K. Hillier from Cambridge brought this to light a few years ago.  http://www.agu.org/pubs/crossref/2007/2007GL029874.shtml

Lat also shows me this, http://www.newscientist.com/article/dn12218 …. from the article,
”Thousand of new volcanoes revealed beneath the waves.  Satellites can detect volcanoes that are more than 1500 m high because the mass of the submerged mountains causes gravity to pull the water in around them. This creates domes on the ocean’s surface that can be several metres high and can be detected from space.”

So, we can see that underwater volcanoes displace water, the larger ones, causing water to be elevated several meters high, so too, it would seem that the smaller ones would do the same except on a smaller scale.

Obviously, there are several points to be made and more questions to be asked.  Lat continues,  Latitude says:

“…….For some reason, sea bottom volcanoes hold a standing wave over them.
If you add more volcanoes, you obviously add more sea height.  There’s no other physical reason that the ocean would stay that much higher in the Indo-Pacific.  The two red dots off Japan give it away, along with the fact that it follows – exactly – the ring of fire.”

From the article, “Data produced by radar sensors like ERS-1 have been used to produce global seafloor elevation data. Radar pulses cannot penetrate the deep ocean, but they can be used to accurately measure the height of the sea surface relative to a global ellipsoid such as WGS 84. As you know, the geoid is defined as mean sea level adjusted to account for the effects of gravity. Geodesists invent reference ellipsoids like WGS 84 to approximate the geoid’s shape with a figure that is easier to define mathematically. Because gravity varies with mass, the geoid bulges slightly above the ellipsoid over seamounts and undersea volcanoes, which often rise 2000 meters or more above the ocean floor. Sea surface elevation data produced by satellite altimeters can thus be used to predict fairly detailed bathymetry, as shown in the map below.”

I’m familiar with WGS84 as a GPS data set.  Lat offers this for a more detailed explanation of use of  SATELLITE ALTIMETER DATA http://www.ngdc.noaa.gov/mgg/bathymetry/predicted/explore.HTML

Mike, who shall be known from hence forth as Grumpy Grampy says, ”[T]he prevailing wind direction also contributes to the sea level. I have a problem with satellite sea level measurements as the surface of the globe is always in flux over extremely long periods of time. You have a valid point about the Ring Of Fire which is ignored by many as is the Gakkel Ridge and the string of Geothermal activity that makes up the West Antarctic Peninsula and beyond.”

I offer the notion that the volcanic activity would cause some expansion of the water.  How much?  I haven’t a clue.  Lat correctly points out that we should see both expansion when heat is applied and contraction when the heat is removed.  I didn’t offer then, but I’d state now, if the volcanoes are as active as we’re led to believe, then there would be almost a constant source of heat for that area.

Lat shows a monstrous volcano in about center of the red glob on the global sea level map.  http://www.abovetopsecret.com/forum/thread594646/pg1

Grumpy Grampy  offers, “I see it as the rate /speed and direction of change in sea level. I also see it as the current manifestation of the PDO Ocean Atmosphere circulation pattern. The ENSO region of the equator is losing height at about the same rate as the western pacific is gaining.  I understand they have found many volcanoes using the method you describe. ( I prefer the term “Geothermal activity” as a lot of what they are finding is vents on the ocean floor).  I see this as more of an indication the PDO shifted to what is called the negative phase related to the west coast of the US.  What they are showing is not a standing wave but change in elevation over time. The way these graphics are produced are meant to confuse people and based on short periods of time they are little more than conversation pieces.”

Lat replied, “They are showing a change in elevation that is not possible or sustainable. Is it going to keep changing elevation forever??

It’s a stupid satellite glitch…..That change in elevation does not taper off to the east because of currents or temperature…it’s running the wrong way!
It tapers off to the east because of satellite drag.  It’s the same effect you get with radar when it tries to look over the horizon at a thunderstorm.  Theses satellites are orbiting west to east, it’s still feeling the drag as it goes east, as it gets further away it feels less drag, so the little red blogs taper off.”

Grumpy Grampy….. “It is going to change elevation forever but not in the same direction, but averaged over the time measured they claim that is what was measured. Example: In 2002 they measured 10 mm and in 2009 they measured 150mm the average per year would be 20mm per year and it does not matter that they only took two data points. I say it is BS and does not mean anything. I also agree about the quality of satellite results. Maybe in 40 or 50 years they will have the “Bugs” worked put of the equipment. They can not admit problems as their jobs depend on people thinking they are getting results. The only measurement of sea level that is meaningful is its relation to connecting land surfaces. The only measurement of land surface is it relation to sea surface. Global sea level is a fantasy used to scare little children. Using satellites to measure sea level is a waste of money and resources. I feel the same way about using a satellite to measure global temperatures.  Satellites provide weather information that can save lives and help people prepare for severe events. I look at the satellite imagery when weather systems are approaching my location.”

I bolded part of Grumps comment, because this is a pertinent point, that warrants a discussion all by itself.  But, it doesn’t address what we’re seeing with the red colored part of the map.  Prior to the bolded statement does.

Lat, “…..But that tag line heading east is a artifact of the satellite, it has nothing to do with real life.  Look at the two red dots off Japan, they have that same drag line.  That has to be something pulling on the satellite, and as it get further over the horizon, the pull gets less. That’s the taper.  The satellites are shooting straight down, it’s impossible for that taper to be real sea level where it is. But something pulling on it will give that effect.”

These are my thoughts.  Clearly, the tapering is an artifact of the altimetry employed by the satellites.  I think though, it is better to concentrate on the specific issue of why that red blob persistently exists there.  We can see it on other sea level maps.

More interesting though, if we lengthen the time period, obviously using a different data set, we see this……

A slightly less pronounced blob with more of the tailing artifact.  Or, less refined satellites.

Now, I had always thought, that instead of seeing sea level rise and fall, what we were seeing was an expression of heat and cooling.  On this map above, we see Iceland and Greenland with pronounced altimetry.  Dr. Hillier noted a decrease in volcanic activity in that area.  This is consistent with the maps above the most recent.

As to the side discussion as whether this is an expression of rate or persistence, it is both.  Clearly, regardless of the satellite data set, we see a continual rise in sea level in the area of the “Ring of Fire” for over the last nineteen years!  This defies logic and knowledge.  Unless there was a giant dimple in the ocean 20 years ago, this clearly isn’t what occurred.  That said, Grump’s (Mike’s) analogy is spot on.  They took two end points and averaged.  So, the question is, what caused the extreme rise there, and how does it relate to our global average?

My question, is it the volcanoes themselves causing the rise of the surface water or the heat expanding the water, or both?

Last comment.  This subject is rife of pits and pratfalls.  I don’t wish to discuss all of the other difficulties with the data sets and adjustments, unless they can be tied to this particular line of thought.  Clearly, there are more problems with the satellite altimetry than one can cover in a thread.  Suffice it to say, this should be just another nail in the coffin of the sea-level alarmism.  Again, all constructive comments are welcome.

Update!  I had remembered some news bit about the underwater volcanoes by Iceland a while back and wanted to check to see if we’d see the same thing.

One of the problems I’m having, is that while Aviso offers a data download, apparently the number they give for a specific date is a cumulative value.  I haven’t found where its broke down specific to location.

So, if we scroll to the bottom of the comment section, we’ll see where Lat brings us, yet another map.  This is of the earth’s gravity field as shown by GOCE. 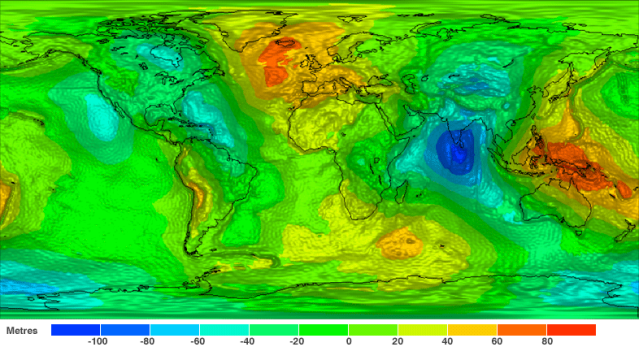 SEE INDONESIA AND POLYNESIA AREA AS WELL AS ICELAND/GREENLAND AREA

So, this gets me to thinking I can find some more information about gravity and how it might relate to what we’re seeing as sea-level rise.  So, off I go, and I find this little jewel of a press release…. http://www.universetoday.com/8738/gravity-map-released/

And, I find this……..  now, I’m not a graphics guy, so this is a bit crude, but I’ve added some black lines that follow another graphic presented here earlier. ….. The Ring of Fire graphic. 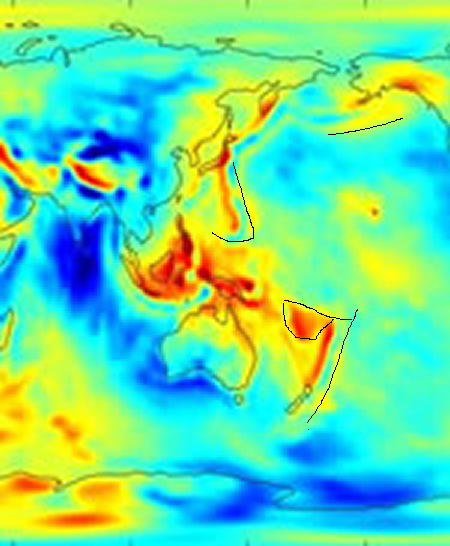 What does this all mean?  Well, for one, we’ve shown how the sea level maps offered by the various satellites’ altimetry are showing gravitational pull, specifically from underwater volcanic activity.  I don’t believe there can be any serious doubt about this.  We have also brought forth significant questions about the tailing effect shown in the altimetry maps.  And, we can say this is probably artifact of the satellite altimetry rather than any reflection of reality.

Now, there are some more fundamental questions we need to ask.  First, would the gravity manifest itself as an increase in sea level?  This seems a bit counter-intuitive to me.  It seems to me, the higher the pull, the closer to the source matter would be.  And, obviously, with the links provided in the post and comments, we see documentation that 1) this is a function of altimetry and 2) this is a known dynamic.

It seems likely to me, but I can’t prove it………. yet.  That the people reporting sea-level rise are either errant in accounting for this dynamic or (to be very charitable) are simply ignoring it.